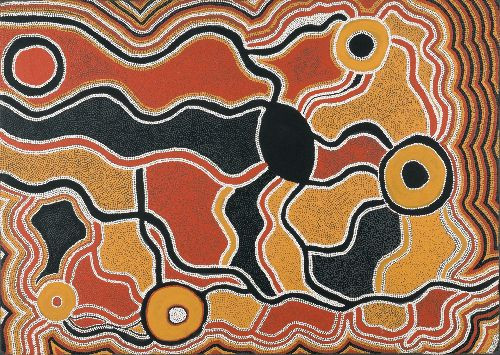 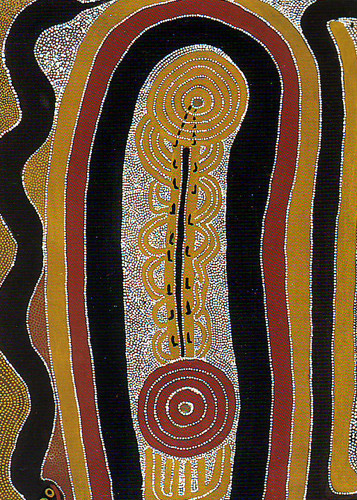 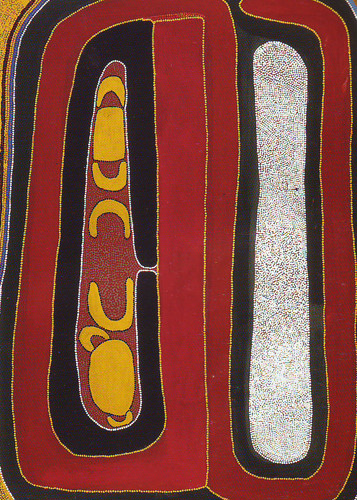 A greatly respected law man and elder who supported the coming of the Christian church to the Balgo area. Sunfly worked with anthropologist Ronald Berndt, recording Dreaming stories and designs over the course of some two decades. In 1981 and already in his mid-sixties, Sunfly began painting with a group of men producing stone sculptures for the ethnographic art market with mission employee and later art advisor, Warwick Nieass. During this period, artistic activity was stirring among desert communities. As a senior Kukatja ceremonial leader, Sunfly and other elder men of the community, sought to create a body of work to record in detail the site maps of the desert country in which they grew up prior to outside contact. Sunfly’s early endeavours made a significant contribution to the first exhibition of art from the Balgo community held in Perth in 1986. Hosted by the Art Gallery of Western Australia, Art from the Sandy Desert was the first public recognition of the nascent art movement at Balgo Hills and gave the lead to their subsequent establishment and commercial success. By the time Warlayirti Artists was established in 1987, Sunfly was already in his 70’s and a regular painter until he passed in 1996. Some authors have argued that because he initially painted from Yagga Yagga where the art centre coordinators would deliver him canvas, his style developed independently from other Balgo artists working in the dot and line or so-called Pintupi style of painting (Ryan. J. and Bardon. G. 1989 Mythscapes, NGV). The same could be said for his wife and fellow senior artist and collaborator Bai Bai Napangardi (c.1939-2020). The use of bold colour and simplicity in his work attracted the attention of private and public galleries, and he was promoted as one of the major Balgo artists. In 1988 he executed a mural in Forrest Place, Perth.

Sunfly was survived by his three daughters who are also establishing themselves as artists (see Pauline Sunfly).