Add to WishlistAdd to Compare
Description 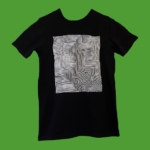 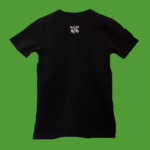 “Snake coming. He saw people and kids dancing. Women and men dancing around the camp fire. Dancing and making a big noise, and he was looking at them. He ate them. Whole lot. He bin eat them all. After that his tummy get bigger and bigger and they were tickling him. After he bin spit the whole lot of them out, vomit them up. Some came out his mouth and some came out his arse. And they were still dancing. In that clay pan still rocks, too many rocks, small ones, big ones, everything. This side (north) of Kiwirrkurra (in the Great Sandy Desert). He bin eat them. Whole lot. The snake went inside the hole. There is a pump there and a track, still works, still water running there. My Father (Tjumpo Tjapanangka) bin put that pump there. He was going to put an outstation, but to far from here (Balgo).”

This is Vincent’s fathers country called Marua, a long way south of Balgo this side of Kiwirrkurra